The UK has formally joined forces with a US laser lab in a bid to develop clean energy from nuclear fusion.

Unlike fission plants, the process uses lasers to compress atomic nuclei until they join, releasing energy.

The National Ignition Facility (Nif) in the US is drawing closer to producing a surplus of energy from the idea.

At a meeting this week sponsored by the Institute of Physics and held at London’s Royal Society, a memorandum of understanding was announced between the three facilities.

The meeting attracted scientists and industry members in an effort to promote wider UK involvement with the technology that would be required to make laser fusion energy plants possible.

“This is an absolutely classic example of the connections between really high-grade theoretical scientific research, business and commercial opportunities, and of course a fundamental human need: tackling pressures that we’re all familiar with on our energy supply,” said David Willetts, the UK’s science minister.

The idea of harvesting energy from nuclear fusion is an old one.

The UK has a long heritage in a different approach to accomplishing the same goal, which uses magnetic fields; it is home to the Joint European Torus (Jet), the largest such magnetic facility in the world and a testing ground for Iter, the International Thermonuclear Experimental Reactor.

Part of the problem has been that the technical ability to reach “breakeven” – the point at which more energy is produced than is consumed – has always seemed distant. Detractors of the idea have asserted that “fusion energy is 50 years away, no matter what year you ask”.

But Mr Willetts told the meeting that was changing.

“I think that what’s going on both in the UK and in the US shows that we are now making significant progress on this technology,” he said. “It can’t any longer be dismissed as something on the far distant horizon.”

The Rutherford Appleton Lab is where the idea of fusion energy was first proved, and both that laboratory and the AWE play host to high-intensity lasers that can act as proving grounds for future technology.

The laser fusion idea uses pellets of fuel made of isotopes of hydrogen called deuterium and tritium. A number of lasers are fired at the pellets in order to compress the fuel to just hundredths of its starting size.

In the process, the hydrogen nuclei fuse to create helium and fast-moving subatomic particles called neutrons whose energy, in the form of heat, can be captured and used for the comparatively old-fashioned idea of driving a steam turbine.

Laser fusion at Nif – the basics 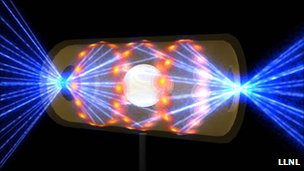 The aim is to achieve “ignition” of the fuel for which Nif is named – a self-sustaining fusion reaction that would far surpass breakeven.

Nif’s director Ed Moses told the meeting that ignition was drawing ever nearer.

“Our goal is to have ignition within the next couple of years,” he said.

“We’ve done fusion at fairly high levels already. Even on Sunday night, we did the highest fusion yield that has ever been done.”

Dr Moses said that a single shot from the Nif’s laser – the largest in the world – released a million billion neutrons and produced for a tiny fraction of a second more power than the world was consuming.

But for ignition, that number would need to rise by about a factor of 1,000.

The UK leads the High-Power Laser Energy Research (Hiper), a pan-European project begun in 2005 to move laser fusion technology toward a commercial plant.

“We recognised several years ago with Nif… and the ignition that was likely to occur, that the profile of fusion would be raised,” said John Collier, the director of Hiper.

“We were thinking: ‘what would be a way forward, how could Europe define a strategic route for laser power production to take advantage of these developments?’ And that was the kernel of Hiper.”

Both Hiper and Life, a similar effort at Nif, estimate that a functioning laser power plant would need to cycle through more than 10 fuel pellets each second – a million each day. Nif, since its completion in 2009, has undertaken only 305 such shots in its quest for ignition.

“The BMW plant in Oxford is producing one Mini a minute – you think of the complexity of that and you wouldn’t think that’s possible,” he said.

“But these are tractable things; Lego bricks, bullets – these things are made in huge quantities and there are huge intellectual property opportunities for those people, those industries that get in.”